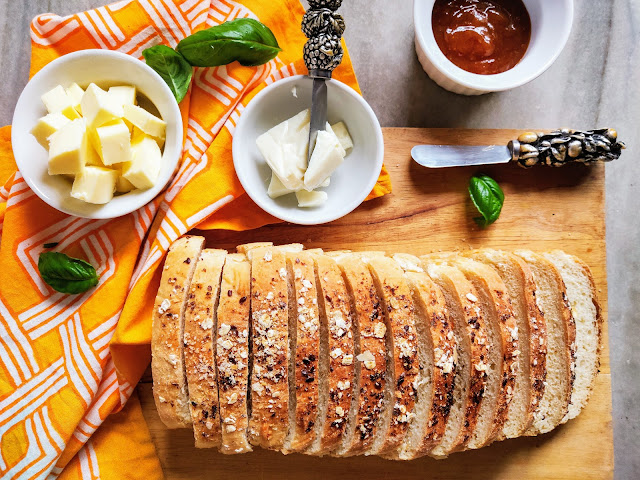 My tryst with yeast baking started when I was about 15years old. I was a complete Daddy's girl and there was rarely an occasion, when Pa would refuse my requests. I was a prolific reader and would devour words like there was no tomorrow. I was allergic to direct sunlight and hence outdoor sports wasn't my refuse, books were my solace. With no 24 hour television or today's digital media for entertainment, written words came to my rescue.  Pa would buy me books and when the Reader's Digest pamphlet came, I would be ecstatic, Pa didn't always share my enthusiasm and my mother definitely  downright hated those pamphlets. I would convince him to buy me books and by then I had also discovered my other love, cooking! So, way back in the 80's when anything 'phoren' was out of reach, which  also meant expensive, these hardcover, foreign published books, left a dent in his pocket. But, like always he would indulge me, despite being a salaried man, with three kids going into boarding schools. And Ma would sulk and tell him to stop spoiling us.
So, when one time a Pamphlet arrived with our monthly copy of Reader's Digest and it had a cookbook titled "Eat Better Live Better", I waited for Pa to come home from office to put forward my case. He was a Judge, and I had to convince him, so I spoke how we all needed to eat nutritious food and there were hundreds of healthy recipes and we could all read and learn about healthy lifestyle, blah, blah. He loved books as much as I did and so it wasn't difficult for him to cave in. We both felt Ma would come around and besides the book would be delivered to his office, so we can always bring out the book, when her mood was sunnier and not dark.
You might wonder, why I'm talking about all this? Its because it was in that book, "Eat Better, Live Better", did I for the first time I hear about baking with yeast. Until then I hadn't even seen what yeast looked like. Super markets and Departmental stores were oceans away, we had only small grocery store and they didn't stock dry yeast. Today, my neighborhood mom-and-pop store stocks it, and it suffices to say we've come a long way! 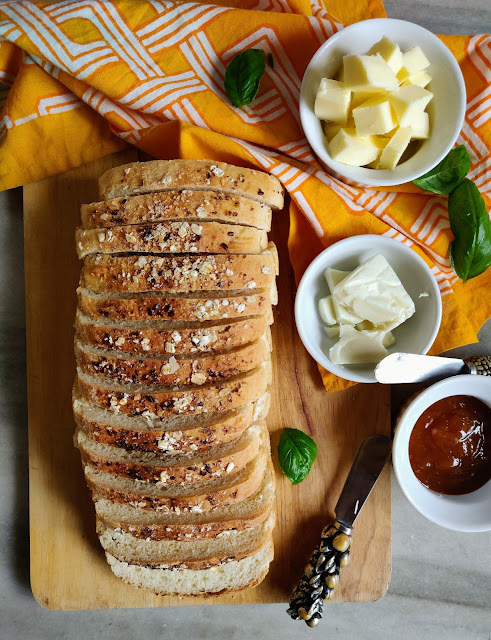 The first loaf of bread I ever made was using the recipe from "Eat Better Live Better" and to get the yeast, I had to use my father's influence again. He asked the local bakery to part with a bit from there stock. Was it dry yeast? Of course not! It was a pasty grey stuff, that a brave 15 year old had never seen, smelt, or touched and had no clue how to handle it. Did I carry out my bravado? Yes, I did and the bread of course was a complete disaster and my Mother dear began her, "Did I not tell you not to try experiments in the kitchen and concentrate on your books?". Mercifully, although the fragile 15 year old ego was completely punctured and all yeast baking was temporarily stalled, the 15 year old has many other distractions to forget these minor disasters in the kitchen.
I learnt to bake bread from my cook, much later and he taught me with gentleness and kindness and since then its been a breeze. Baking, is where I am calm in the simple act of measuring, weighing, mixing ingredients to create something magical.
Here is my recipe for basic milk bread, something that will never fail. Home-baked bread has an unbeatable flavour and you can get as creative as you wish, whether with the shapes or with the flavours. Bread is one of the oldest baked foods. So, if you still haven't tried, go ahead and do so, its therapeutic and is addictive. 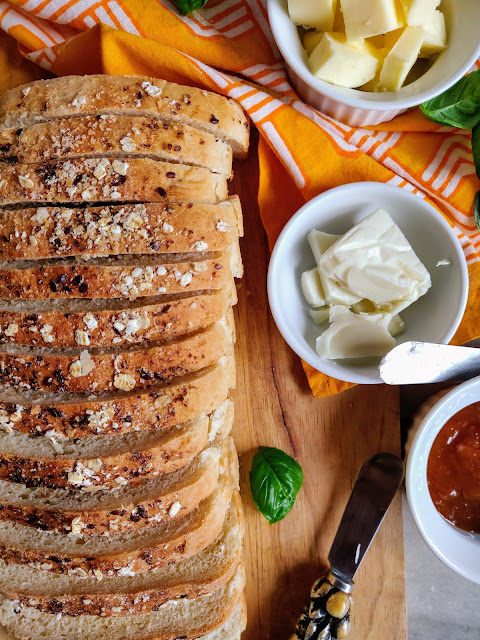 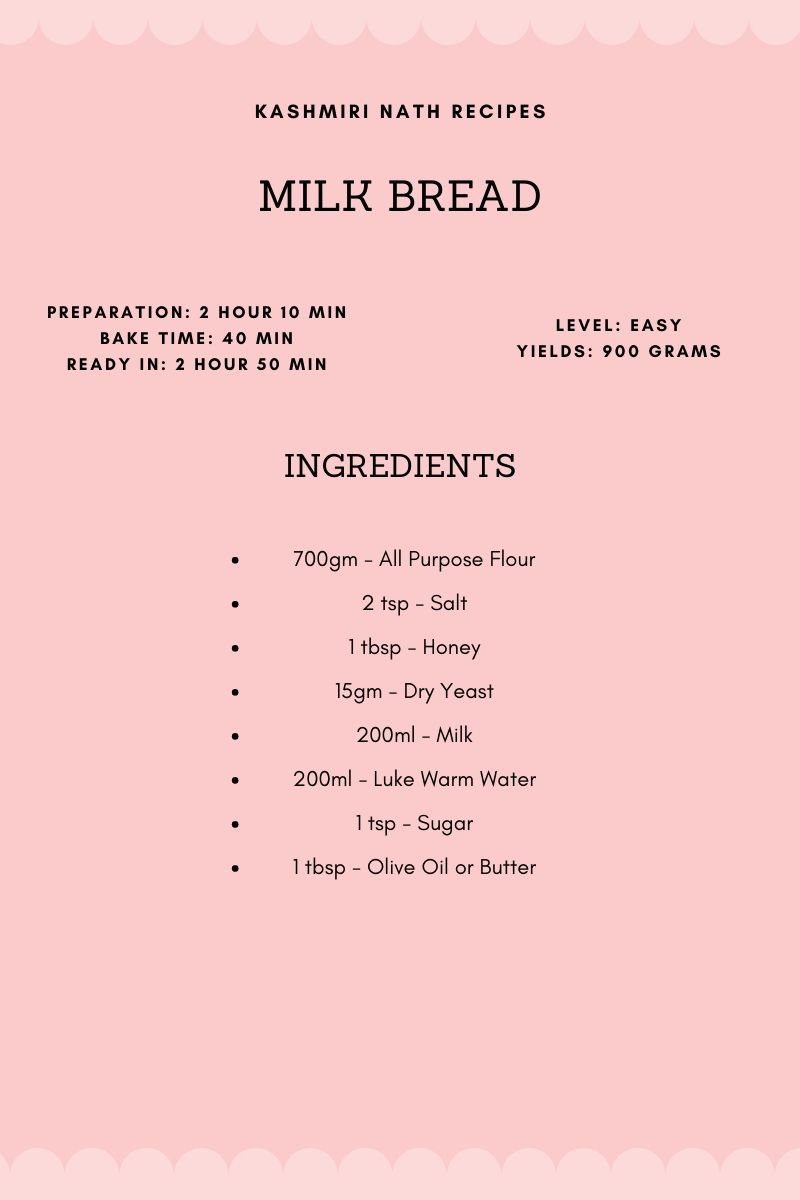 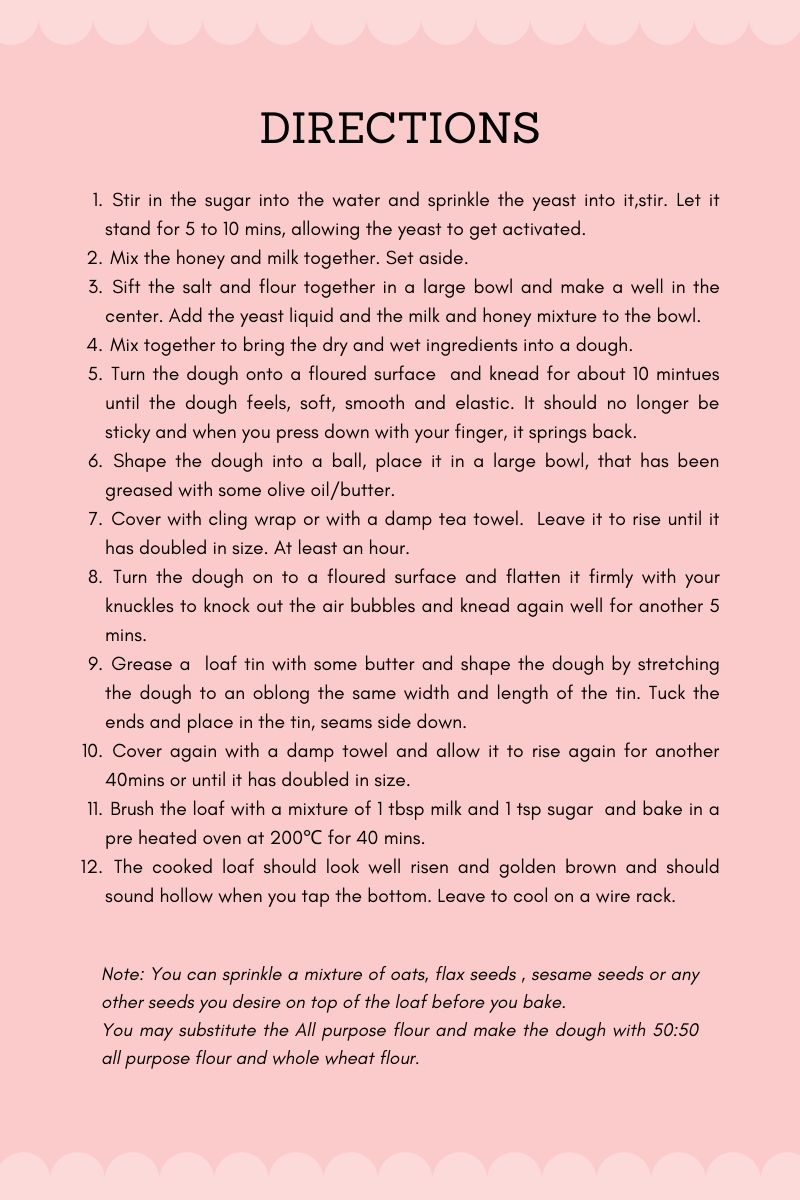 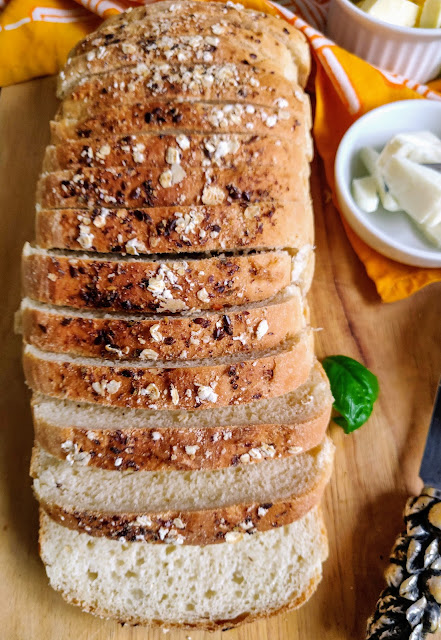 If you try this recipe, we would love to hear your feedback.
Connect with us on Instagram @kashmirinath.
Labels: Baking breadbaking Breads Breakfast Meals 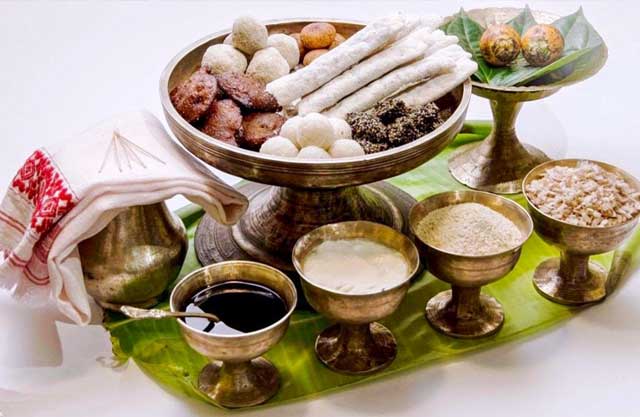 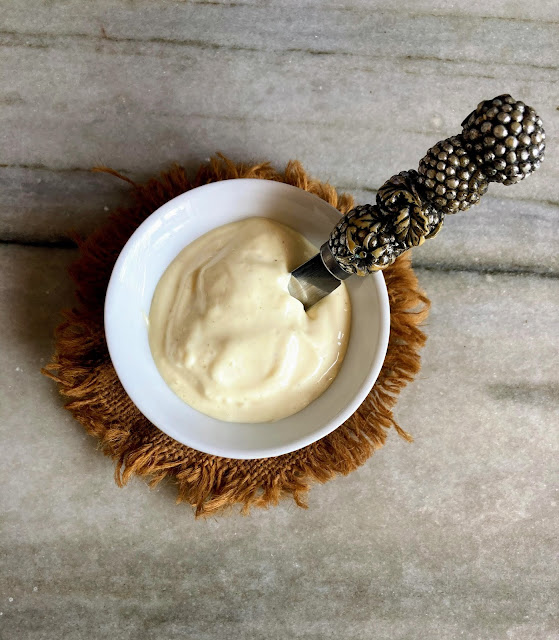